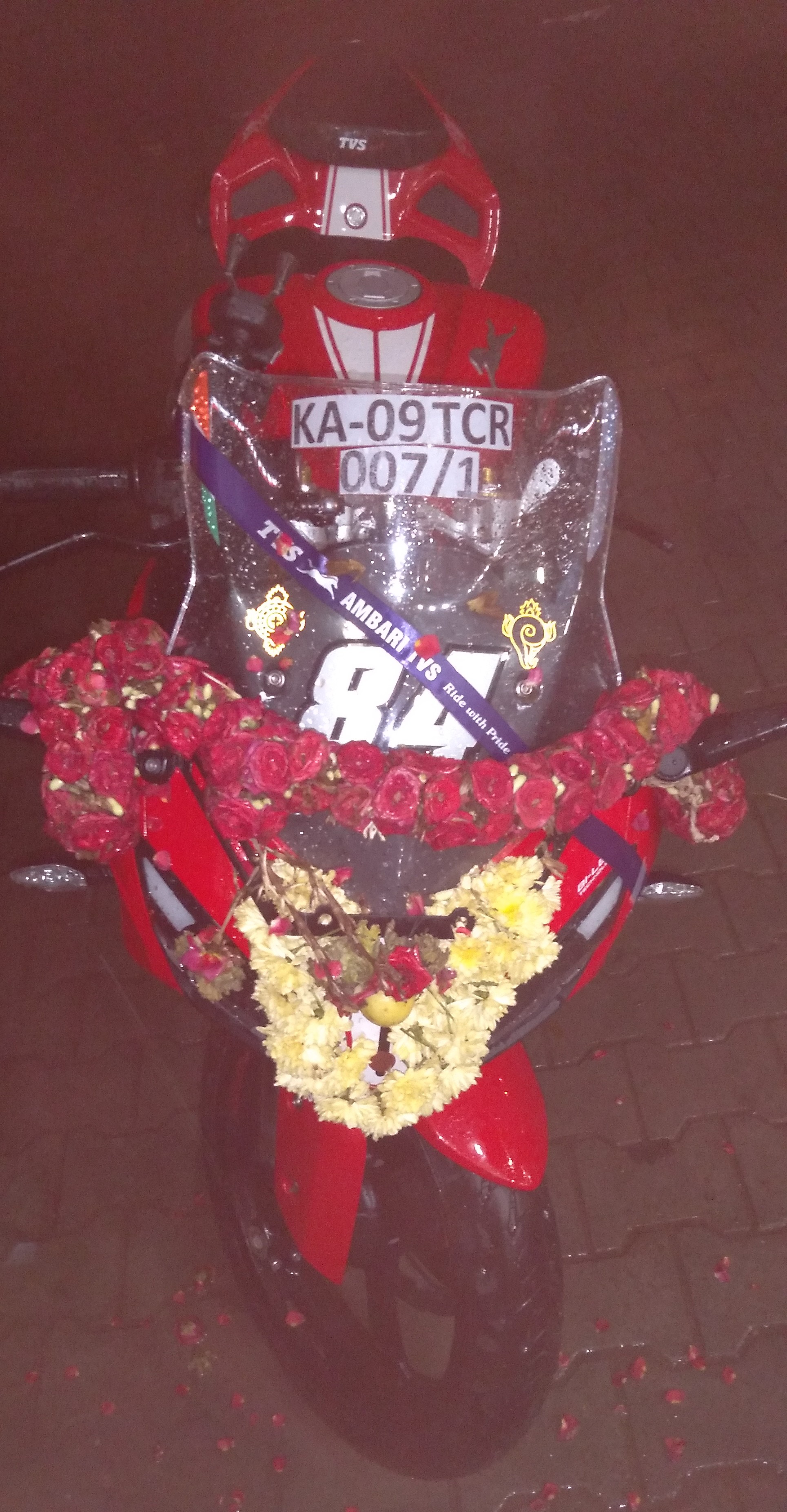 
Twas Monday the 11th of October, approx 6:45PM in Heritage City of Karnataka, Mysuru (Mysore). I had collected the Delivery of my Built To Order (BTO) Bike earlier that day by 2:00PM, after personally seeing it being unloaded from the Truck by around 10:00AM the same morning. The showroom technician advised me Not to exceed 70KMPH while riding to Bengaluru, 140KMs from Mysuru. Also, to Take a 15-to-20 minutes Break every 50KMs, before the Radiator Fan automatically switches on. Now then, Coming to the point, I had an Amazing Bike Ride for the next 4 hours 15 minutes in drizzling rain, using one out of only two available riding modes - you guessed it - Rain. The other riding mode being Urban, and another two riding modes of Sport and Track are Locked till 1st service. Once I left from Mysuru by 6:45PM, few spells of rain had already created puddles in potholes, and wet roads throughout the Ring Road in Mysuru. I could easily maintain speeds between 40KMPH to 60KMPH, till I reached the Mysuru-Bengaluru Highway. With the ongoing expressway work leaving only one lane of roads intermittently, I could still overtake Cars and Bikes alike similar to Hot Knife thru Butter!! The (limited) power of 25 Ponies was enough to drag this 175 Kilo Bike, along with 70 Kilo rider like a prancing horse (I know you're thinking of Ferrari!). Within 15 minutes I had reached the next town in my route of Srirangapatna, and was thinking by when I'll clock enough miles to get the 1st Service Done, so that I can enjoy the sheer power of All 34 Horses packed in the Reverse Inclined DOHC Engine, developed by TVS after joining hands with BMW. I took a Dinner break for a good 30 minutes in Mandya, 40 KMs from Mysuru. The coolant temperature was normal, and as I soon ad I fired up the engine it showed signs of eagerness to clock more miles! At certain turns, I even managed to lean (carefully) and the Michelin Tyres gripped as much as it would have on a Dry Road. Though I was riding at around 60KMPH instead of over 80KMPH thru those turns. I stopped for Tea another 70KMs away after Channapatna and reached almost 90KMPH on a completed stretch of 3-lane Expressway. But the bike seem to be asking me Not to be shy in releasing the throttle. I reached Bengaluru safely by 11PM, and the Radiator Fan never switched on during the entire 140KMs journey. It only did the next day within few Kilometres and riding for 15 minutes!! That's Bengaluru Traffic for you! In summary, I had a Wonderful, Memorable, Pleasure Ride the same day I got my hands on Twaritha (Named her as as it means Being Swift). And can't wait to clock thousands of Kilometres riding her to places unexplored. Safe Ride. Happy Ride - Rakesh

how I can post my story liek you please guide me