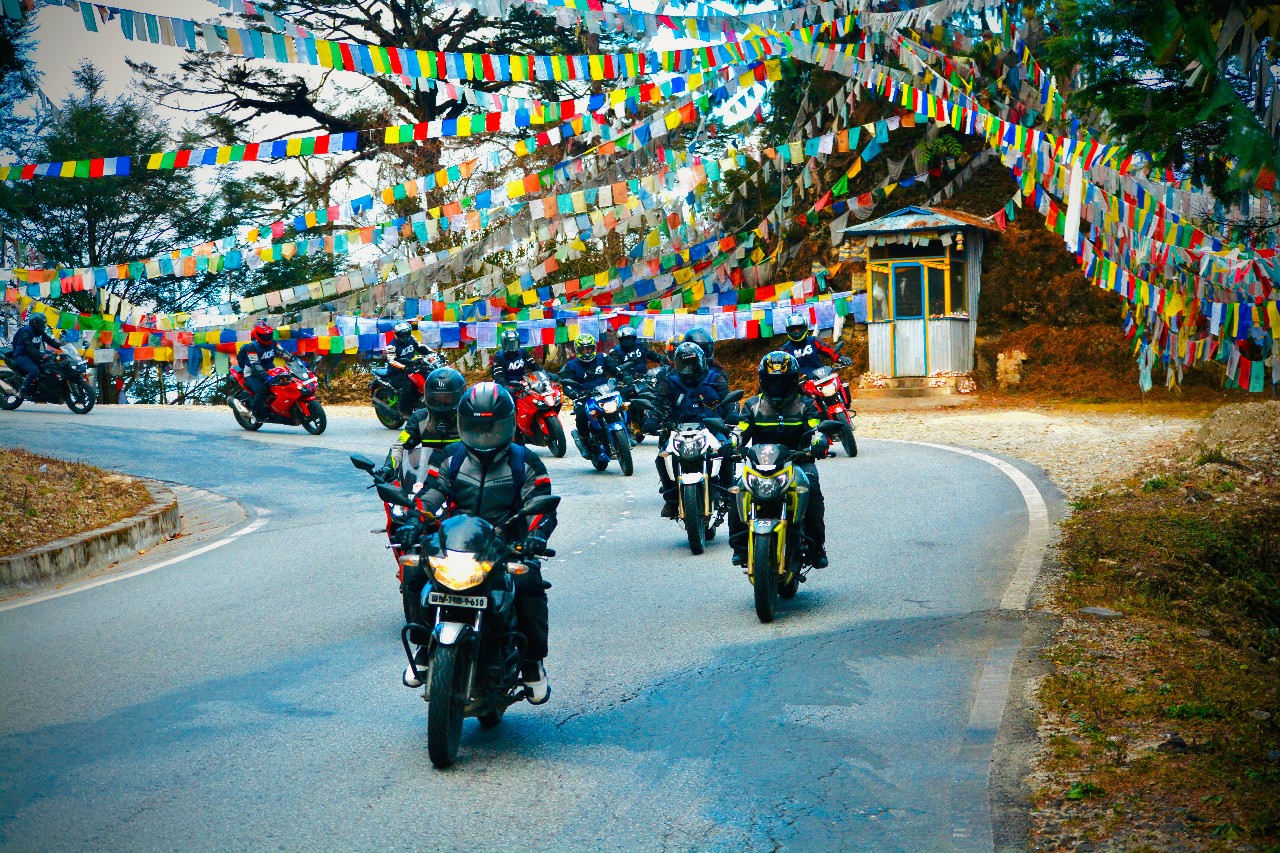 
A ride like never before to the land of thunder dragons began on the 19th of December 2019. The day when TVS Apache Owners Group (AOG) came together for their exciting ride to explore one of the most beautiful countries in Asia, Bhutan. The fierce storm that rolls from the Himalayas, gave rise to Bhutan’s other name - the land of thunder dragon. For many years, Bhutan lived in seclusion from the rest of the world to preserve their rich and deep-rooted culture and traditions and has only recently allowed travellers into their country. This inquisitiveness is what makes Bhutan extra special to explore and experience. The geography itself speaks volumes about its mystifying lands. This small country is sandwiched between India and Tibet while being bordered by the snow-capped mountains of the Himalayas. Thus, the AOG gang were all set to traverse the unclimbed peaks through the rugged terrains. Another challenge that trailed the difficult roads was the harsh winter weather in December. Although the sight of a snow-filled mountain was a visual treat, to get through the crisp winter winds was truly a test of resilience for the riders. Nevertheless, there was nothing to deter our AOG riders who were ready to battle the cold climate and tackle the tough tracks. The journey to test the pursuit of performance of the man and machine began with 30 riders, all geared up to conquer the beaten tracks as the fruits of labor are always worth the tough journey ahead! The Beginning The riders arrived at Siliguri, which rests in the foothills of Eastern Himalayas in the state of West Bengal. It is a major gateway for trade operations across other countries. Adding to its beauty is the dense forests, clear waterbodies and nature at its best. Upon arriving in Siliguri, the riders were briefed about their journey. Siliguri is one of the fastest developed cities in the state and there were multiple restaurants and eat-outs to enjoy. The riders stayed back at Siliguri that day to gear up for their journey ahead. The Apache riders began their ride to Phuentsholing, which is situated east of Siliguri. The ride was about 170 km in distance, which took approximately 6-7 hours of riding. Upon crossing the border, there was an immigration process held, which is mandatory for all tourists entering Bhutan. The cold weather kept intensifying, testing the riders’ tolerance. Since there was a delay in the process, the riders had to journey through the severe cold late in the evening. Some of the riders even caught hold of the bike’s exhaust to beat the unbearable cold conditions, despite being covered in multiple layers of clothes and winter jackets. The riders cruised through the tracks to Thimphu the next day, which is about 170 km from Phuentsholing. This 7-hour ride was filled with mesmerizing views that kept the riders enjoying every bit. Thimphu is the capital city of Bhutan where the essence of their deep-rooted traditions and rich relics stand as the pride of the nation. Here, the AOG riders together relished authentic Bhutanease cuisine. Not just the ride, but also the charming city of Thimphu left the riders with surprise as they witnessed the perfect amalgamation of ancient and contemporary lifestyles in the same place. After exploring the city and shopping in the streets, the riders took a break for the day in one of the hotels and enjoyed their bonding moments around bonfires and dinner. The trip would have definitely been incomplete without visiting the Buddhist temples and monasteries in the city. Later during the day, the riders visited the largest Buddha statue and also went on a special shopping spree to take back home souvenirs from this charming country. 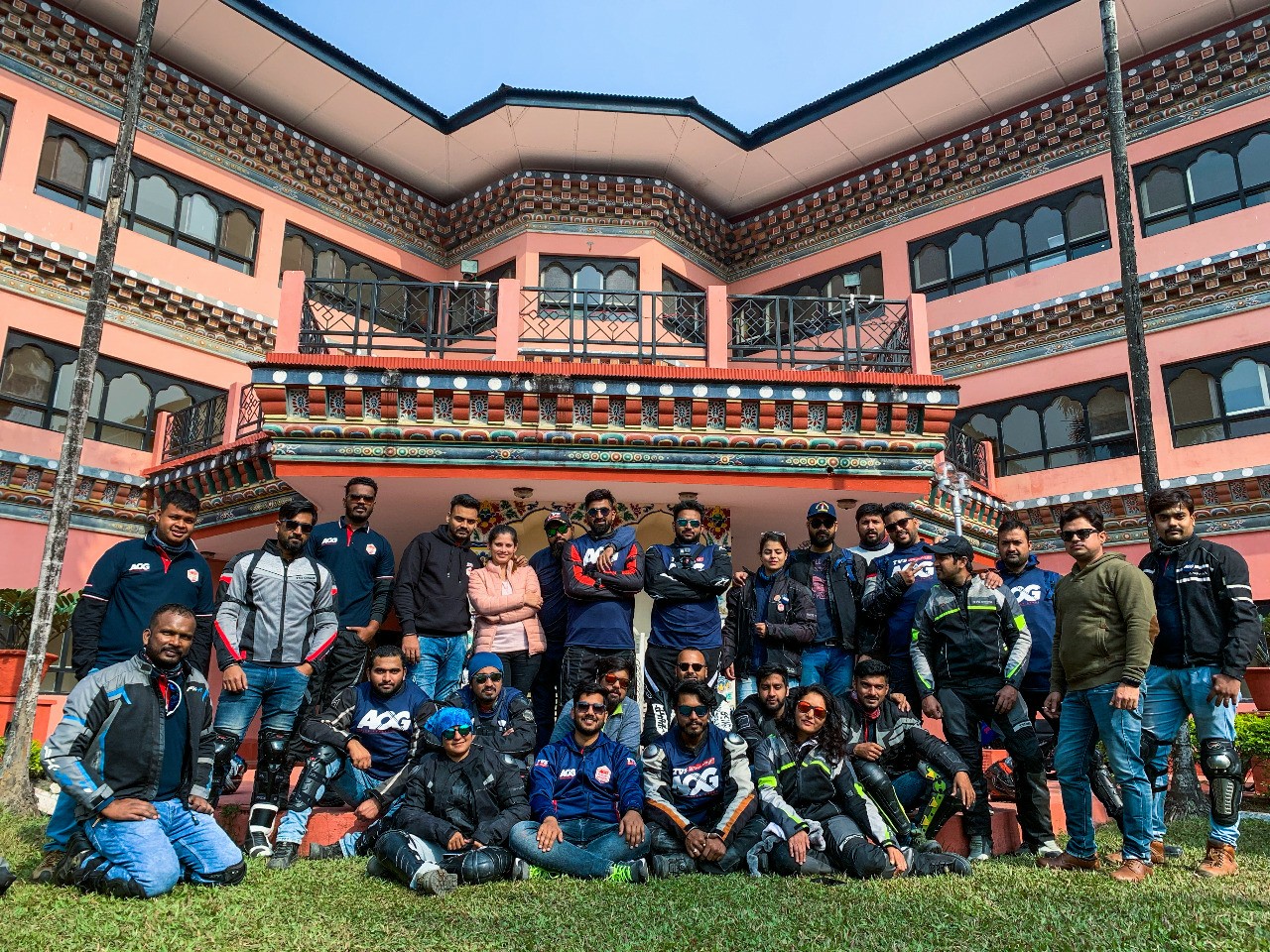 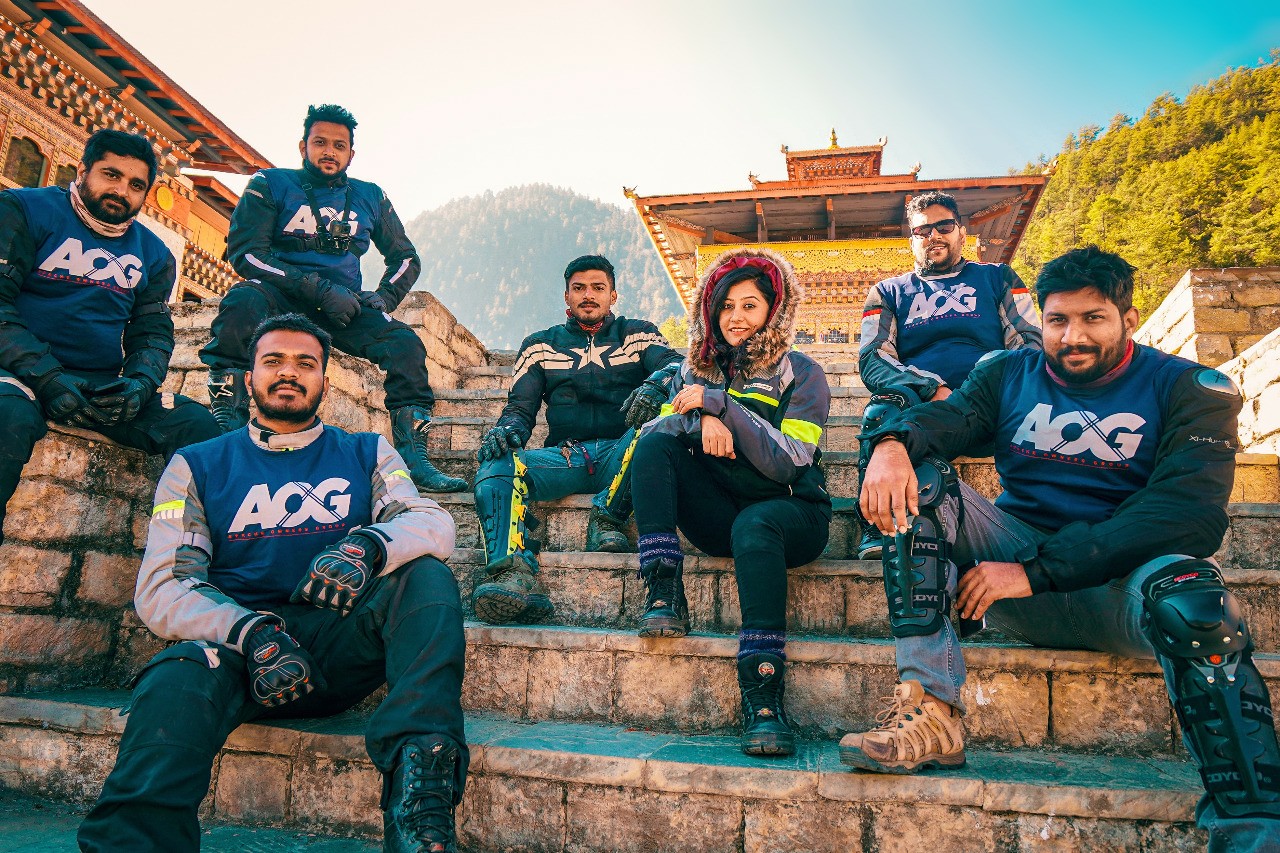 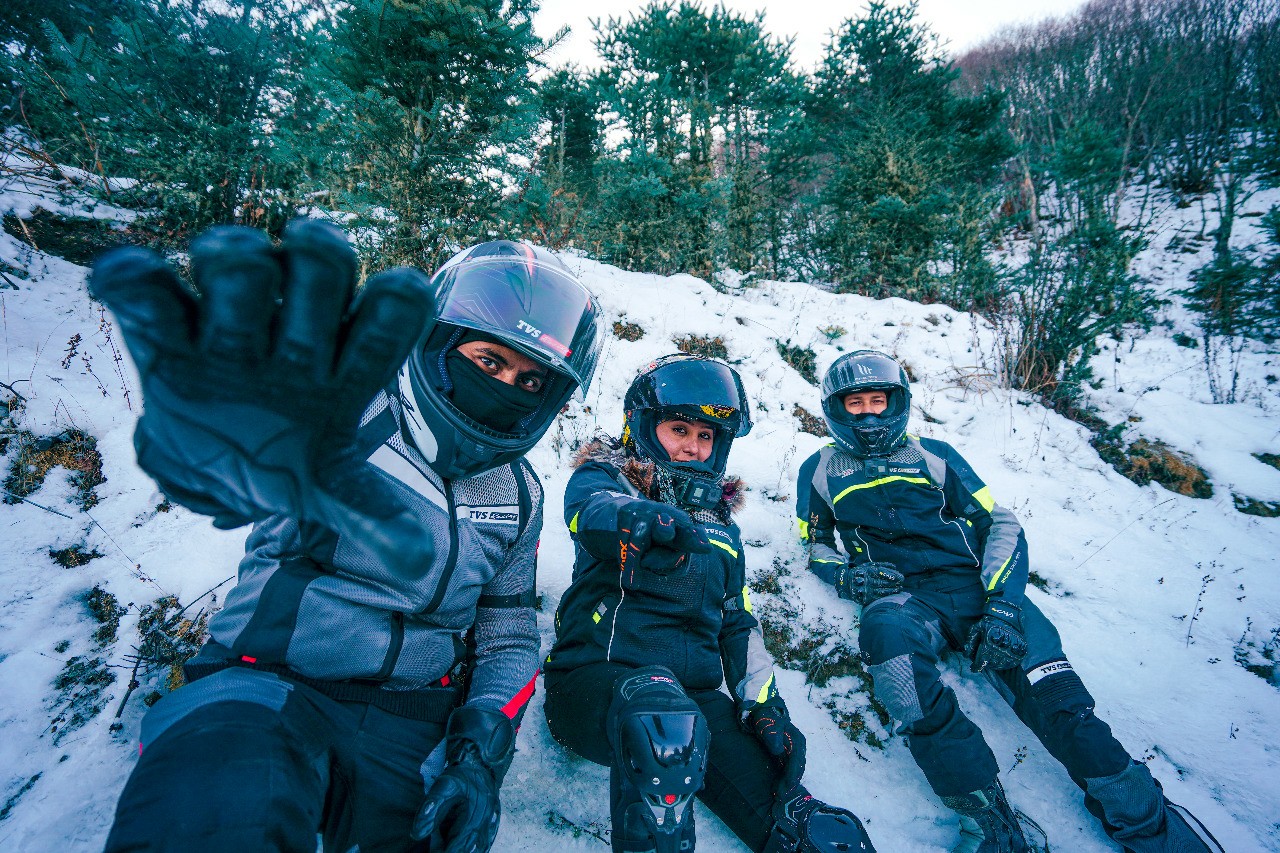 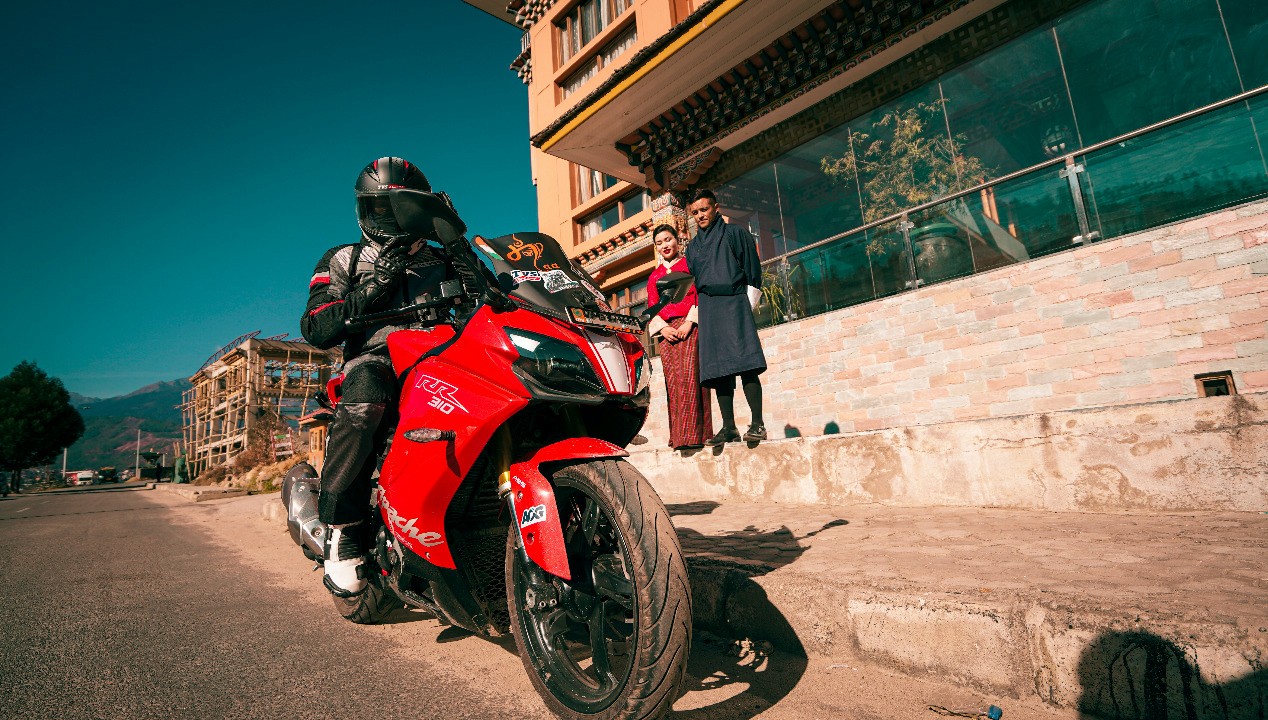 Hi Swaroop, Congratulations on your RR310! Please fill in the details here https://bit.ly/3s15MDA. We will add you to the nearest group. Regards, Team TVS

Hi Kichu, did you mean to join the AOG? If yes, please fill in the details here https://bit.ly/3s15MDA. We will add you to the nearest group. Regards, Team TVS

Hi, recently purchased RR 310 and would like to join the group. Pls assist. Thanks

I LOVE U AQIB

Hi Mahendran, Congratulations on your new RTR 160 4V. Please fill the detials here https://bit.ly/3s15MDA. We will add you to the nearest group. Regards, Team TVS

Hi Alexander, Congratulations on your new RTR 180. Please fill the detials here https://bit.ly/3s15MDA. We will add you to the nearest group. Regards, Team TVS

I would love to join AOG rides. I own an Apache 200 4v BS6. Do let me know about any rides in Northern Part of West Bengal.

Tvs Apache 2.0 is the best of performance

how to join group?

Hi Aniket, please stay tuned to our 'Events' section where all the rides will be announced along with the registration link and details.

how do I enroll and get added to the groups for long rides ?

Hi Manjunath, Congratulations on your new Apache310. Please share your full name, mobile number and city. We will add you to the nearest group. Regards, Team TVS